Japanese chef, Takehiro Kishimoto does not just cook food beautifully, but also produces something beautiful out of food. After scrolling through his Instagram account, we can see why it has become such a popular page. Chef Kishimoto has documented his artwork for all to see, from carved out radishes, to carved out avocados. 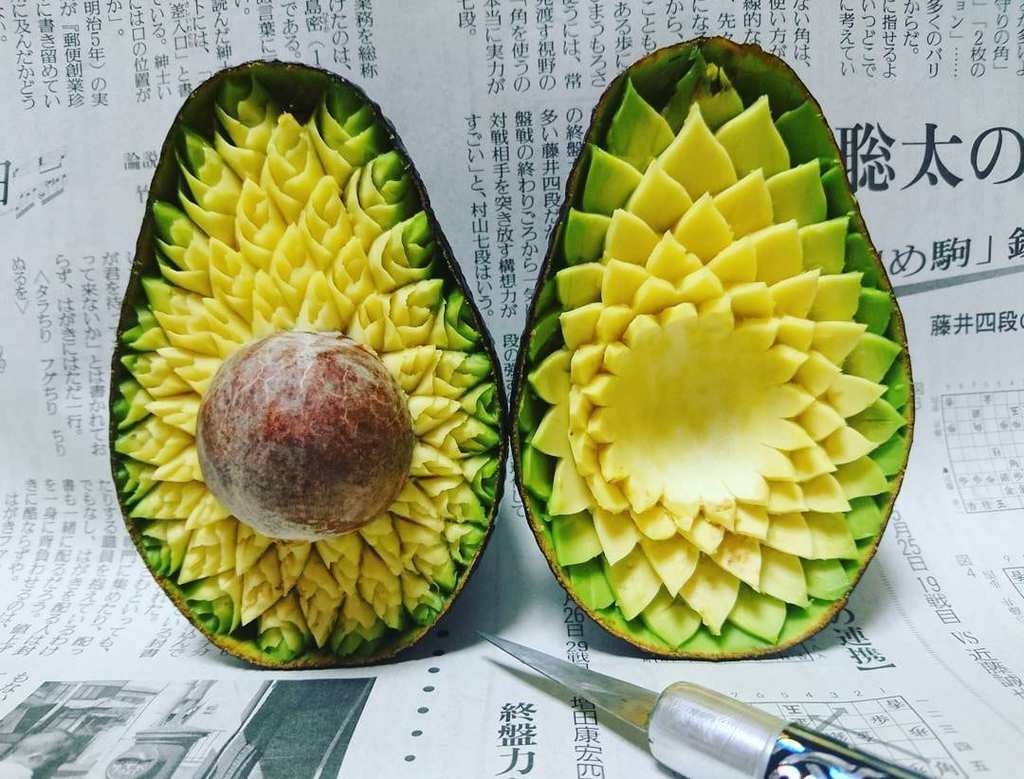 This isn’t just a simple cut of the fruit and vegetable either. He turns his produce into beautiful flowers, such as carrot peonies, and even sketched anime characters in eggplants and apples. While most of us may chop broccoli at the stalk, Kishimoto is etching geometric patterns into cross-sections of them instead.

Kishimoto is from southern Japan, from the city of Kobe, and started his carving over three years ago. From mid-2016, he began posting his work on Instagram which started off as just carving simple shapes. Over time, his work has developed into more difficult designs, and depending on the fruit or vegetable, the carving could take hours. 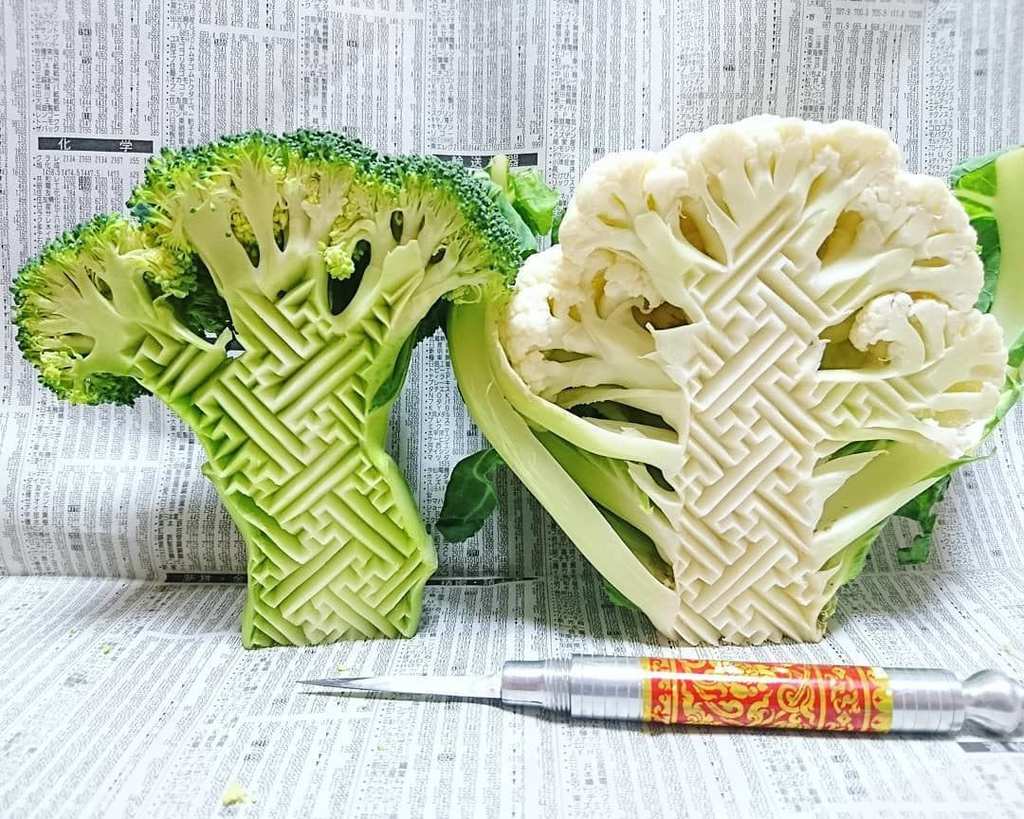 Using a sharp, thin knife, Kishimoto’s designs are inspired by traditional Japanese patterns, which typically convey certain meanings and connotations. Kishimoto has carved a bishamon tortoise into an avocado which consists of upside-down Y shapes, and another is kumikikkou, which he carved into a papaya.

They both symbolize longevity and were used on warriors’ clothes. Sayagata is another design which the talented chef has carved into broccoli and cauliflower. Sayagata originally came to Japan on Chinese fabrics hundreds of years ago and had roots in ancient Buddist art. However, this all started simply because Kishimoto thought it was cool. 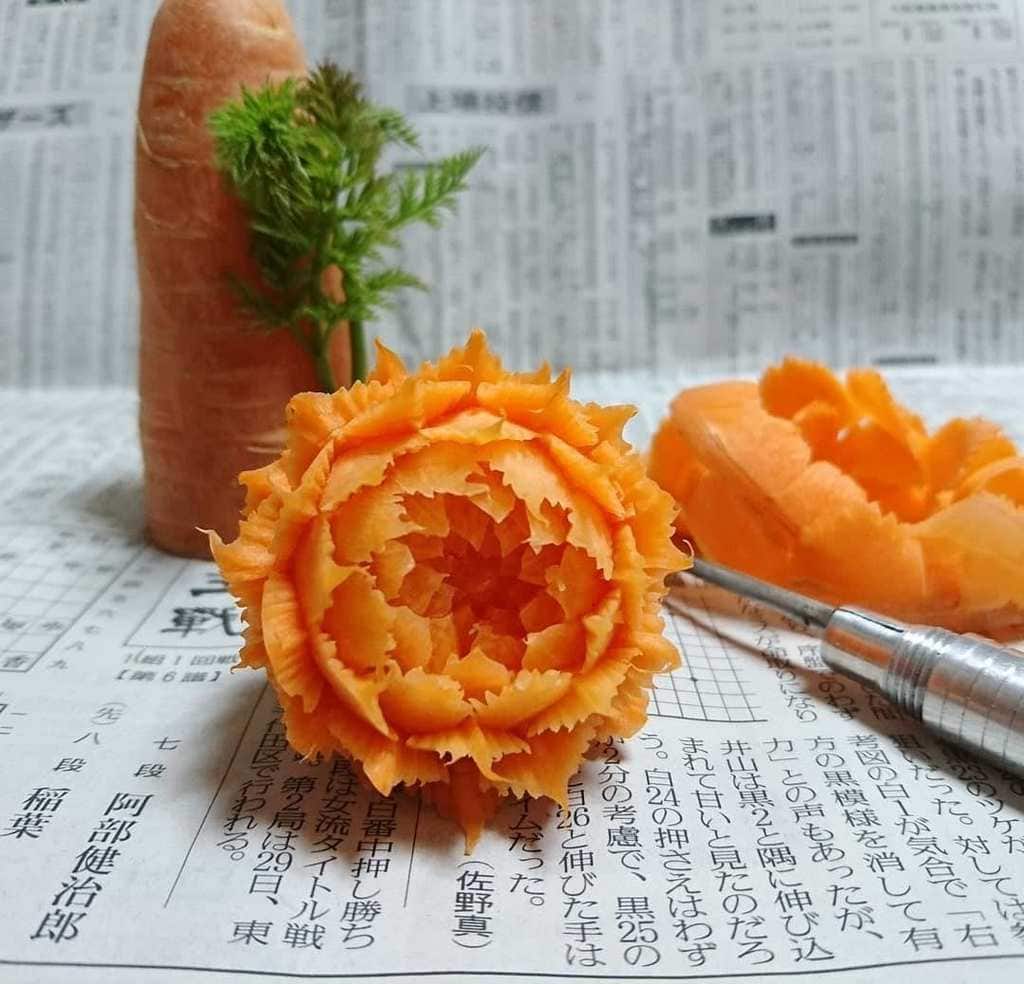 Masters of fruit carving are originally from Thailand, hence why Kishimoto refers to produce carving as “Thai” carving. The old tradition began from chefs cooking for the royal family, but Japan also had a history of food-carving called Mukimono which is hundreds of years old. Kishimoto’s work has impressed many, but he does admit that after he carves the food, and then he eats it!

We all have the image in our mind - the Italian grandmother at home, queen of the kitchen, who ...

Brooklyn Brewery may be the first place you think of when it comes to cooling off with a cold one ...

The Best Iced Coffee Tricks That Will Save You Money

There is only one drink that makes us think of summertime - iced coffee. So when summer comes to a ...